“It’s not about being blonde, it’s about having more fun.” – That’s the motto that Steve Schneider has lived by since he began his guide service- Blonde Ambition Guiding. Naming his guide service after Madonna’s hugely successful 1990 tour of America, Steve and his blonde haired partner, Hans Florine, began to guide clients across the globe. As one of the few guides in the Bay area with American Guide Association status, Steve has a vast amount of experience in teaching the nuances of rock climbing. He has made over a hundred ascents of El Capitan and has spent as many nights on Yosemite’s colossal granite wall. Why get into big wall climbing? Why struggle up enormous walls like Yosemite’s El Capitan? “Because it is magnificent,” Schneider says. “It’s right there- Mecca. Why not?” Steve will be holding a couple of classes on big wall climbing technigue. With 3 free ascents of El Capitan, sends of 5.13 offwidth on El Capitan, and more than a half dozen speed records, Steve knows the “Big Stone” better than anyone around. He offers sage advice, “Take baby steps toward your goals. Do Grade IIs, IIIs, IVs, Vs, then you can climb El Cap. Baby Steps.” 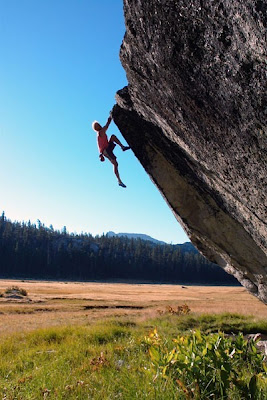 Schneider’s classes are a great opportunity for anyone that ones to head out to nearby Yosemite and go climb some of the enoprmous granite walls in the National Park.
Classes will be held March 19th and 21st from 6-9PM at Berkley Ironworks. Cost: $140 ($100 for returning students) 2 min & 6 max. To sign up for the class email Steve at blondeshipoopi@yahoo.com