Gregor Peirce, a 19 year old Touchstone route setter for the past year, has had a very successful season in Bishop this year.

After making the 6 hour drive from the Bay to the Buttermilk boulders, Gregor hiked directly to the classic crimp fest The Swarm a V13/14 in fading light.

“I didn’t warm up because I was running out of daylight and I had to make every try count because I was running back and forth between the camera and the base of the climb,” said Gregor. “A few tries in I found myself standing on the top. It was an amazing feeling to send it all by myself with no one around.”

On the drive back to his campsite, he stopped by the Grandma Peabody, and Direction, a V13. “I had no expectations, but I threw on my headlamp and a couple tries later I had sent the thing,” said Gregor.

The Swarm from Gregor Peirce on Vimeo

In between setting at the Touchstone gyms and taking classes at Diablo Valley College, Gregor back packs, boogie boards, and plays a mean game of ping pong. “Watch out Scott Frye,” he warned the current Touchstone ping pong master.

Gregor first went to Diablo Rock Gym when he was ten years old. The family trip with his two older brothers and his dad was a memorable one. “I cried my way up a 5.7 on my first day.” Gregor began climbing in earnest two years later. “. I remember begging my parents to drive me to the gym. Fortunately, my mom liked to read so she would sit in the car and read a couple nights a week while I climbed.”

Gregor got strong fast. At 15, he won the Youth Nationals, at 16 he made the adult finals, and at 18 he won Youth Nationals again. In between he climbed Scott Frye’s classic Surf Safari, a 5.13d near Mickey’s Beach. He also climbed The Buttermilker, a V13 at the Buttermilks and Crusader For Justice, a V13 at Moe’s Valley. 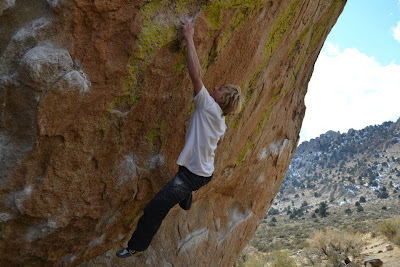 “It is a mystery how I ever got strong enough to do these thing,” said Gregor. “I have been climbing much less than I used to. I only climb when I am motivated now and I think that that helps a lot. I also do some core exercises and focus on getting quality climbing sessions in. There really is no training or anything scientific about what I do. Just climb and have fun!”

On February 8th,Gregor leaves to serve full time as a missionary for The Church of Jesus Christ of Latter-day Saints in the Joao Pessoa Brazil Mission. “But before I leave I have a few boulder projects to take care of,” said Gregor. When he returns he plans on continuing his schooling and climbing for fun.