At 5’8” 145 pounds with brown hair and brown eyes, the 29 year old John Schmid appears like a mild mannered rock climber. After receiving a biology degree from Colorado College, where he began rock climbing ten years ago, Schmid moved to the bay area to take up a job that would support his climbing lifestyle. Schmid became a murse- a male nurse. During the graveyard shift, Schmid works in the neo-natal intensive care unit of Alta Bates in Berkeley where he saves the lives of sick little babies.

After becoming a crack warrior, Schmid headed to Yosemite in an attempt to learn to wall climb. “A few years ago, Geoff Christensen and I climbed the Regular Route on Half Dome (VI 5.9 A2) in a longish day. We topped out in the light. Then James Lucas encouraged us to climb the Nose in a Day. We believed him that we could do it. We made good time climbing to the Great Roof but then it got dark and we got tired. We only had ATCs. We fell asleep with the ropes wrapped around our arms to arrest the other climber’s fall. We topped out in 27 hours 45 minutes. It was a long day. Thanks. James.”

“I’m a good weekend climber,” said the notoriously modest Schmid. On a recent trip to Bishop, Schmid climbed his second, third, fourth, and fifth outdoor V6s. He hiked the steep Every Color You Are and then nearly flashed Atari, falling on the last move and then sending the problem a few minutes later. After a morning at the Buttermilks, where he claims to have gotten worked, Schmid dispatched Mr. Witty (v6) 2nd try and flashed Rene (V5 highball). He also sent Strength in Numbers (a highball V5) and Molly (v5) and French Press (v6) on a subsequent trip to the Sads. “I don’t boulder. I can’t hold things very well.” 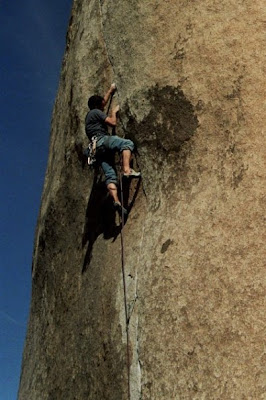 Despite his ‘inability’ to boulder, Schmid climbs with a significant amount of tenacity and dedication. One morning, Schmid downed a half dozen Monster energy drinks and left Berkeley before sunrise to climb Yosemite’s classic Beggar’s Buttress (IV 5.11c). On arriving in “the Ditch”, it started raining. Neither John nor his partner had checked the weather. Determined to climb, Schmid smoked a couple cigarettes than hoofed down to Kaukulator, a slightly overhanging 5.11c test piece on the Rostrum. After hiking the crux, Schmid fought his way throw the notoriously difficult and sandbagged 10c offwidth at the top. Schmid grunted, moaned, and squirmed as he climbed the wrong way into the crack. In an impressive onsight, Schmid clipped the anchors and started to lower. A quarter of the way back to the ground, Schmid yelled to his belayer to stop. For the second time that day it started raining- the second time it wasn’t water but Schmid puking from the monstrous effort.

“I’m already a plastic prince,” said Schmid of his constant presence at the Touchstone gyms. A long time indoor climber, Schmid grew up in LaFayette and climbed at Diablo Rock Gym before moving to Temescal. Schmid splits his time between Great Western Power Company and Berkeley Ironworks climbing with the tough guy sport crew. He climbs with Tony Calvert and Ethan Scwartz, whom he mostly climbs routes with. “I really want to climb 5.13 in the gym so that I can tell James (author). My climbing career peaked 5 years ago in Indian Creek. I want to get back to that high point and tell James.”

Schmid employs a well-known climbing tactic- that of the sandbag. He enjoys downplaying his abilities and then serendipitously sending your project. Watch out for the sandbagger at Ironworks, GWPC, and the local crags.