Last week, Brian “Cuz” Hedrick, a 24-year-old route setter at Touchstone Climbing, made the second ascent of the Impossible Wall Traverse at Berkeley’s Mortar Rock. First established by Chris Sharma seven years ago, the V13 problem has bouted many of the strongest local climbers.

The hardest boulder problem within 100 miles of the Bay Area starts on an obvious jug in the middle of the face and traverses right into the Impossible Wall (v8). “It’s big moves on bad holds,” says Hedrick, who sent the line after working it seven days over two years.

“It’s like Cresiano but better,” says Ethan Pringle, a 24-year-old professional climber from San Francisco, of Mortar Rock. One of the only boulders in the Berkeley hills, Mortar Rock hosts a number of problems, many of them eliminates. 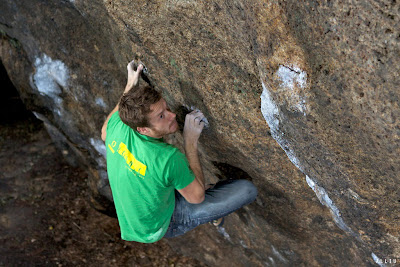 John Sherman, Scott Frye, and Nat Smale began bouldering in the area in 1976, establishing the classic Nat’s Traverse (V8) and developing the V-scale at the urban crag.

A line linking Nat’s to the Impossible Wall traverse remains a 5.15/V14 project for future Mortar Rock addicts. Hedrick maintains that he won’t be heading back to Mortar anytime soon.